By Chance -- Another Exhibit!

I continue to encourage members to send me information about exhibits and shows in which they're participating -- whether affiliated with SAQA or not -- so their work can be shared with all of us.  Sometimes, however, these things are brought to me serendipitously.   For example, I stumbled over this item from member Diane Duncan of Calgary while browsing Facebook this afternoon. 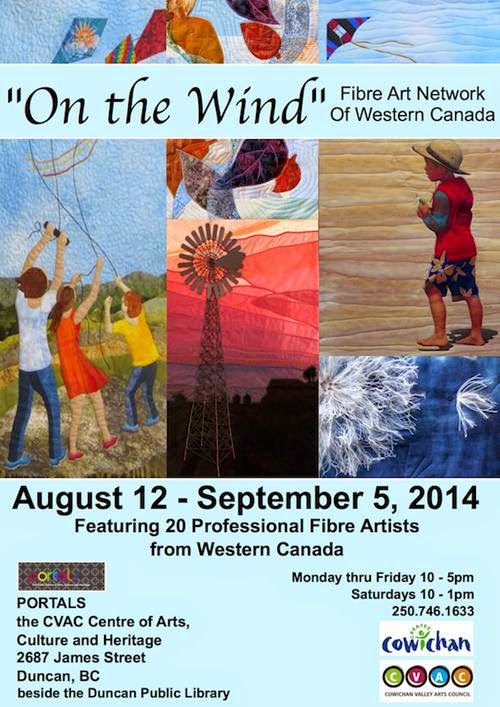 Diane's piece (the windmill, centre of the poster) is only one of what looks to be a fabulous exhibit of textile art by members of the Fibre Art Network (FAN).  If you happen to be in Duncan and area before it closes, do take it in!
at 6:32 PM No comments:

I know I sent out a newsletter earlier today...but to clarify: the date of the September Calgary workshop/Parlour Meeting -- featuring Susan Purney Mark -- is Wednesday, September 10 - at Shaganappi Community Hall.

The organizers of the Pat Pauly Workshop/Evening Talk (in Langley, B.C. in October) have advised that there are 2 spaces in Pat's class for interested parties!   Follow the link (above) for information.


And today the Alberta Surface Design Association (SDA) chapter has posted some wonderful exhibit information about up-coming and current exhibits. 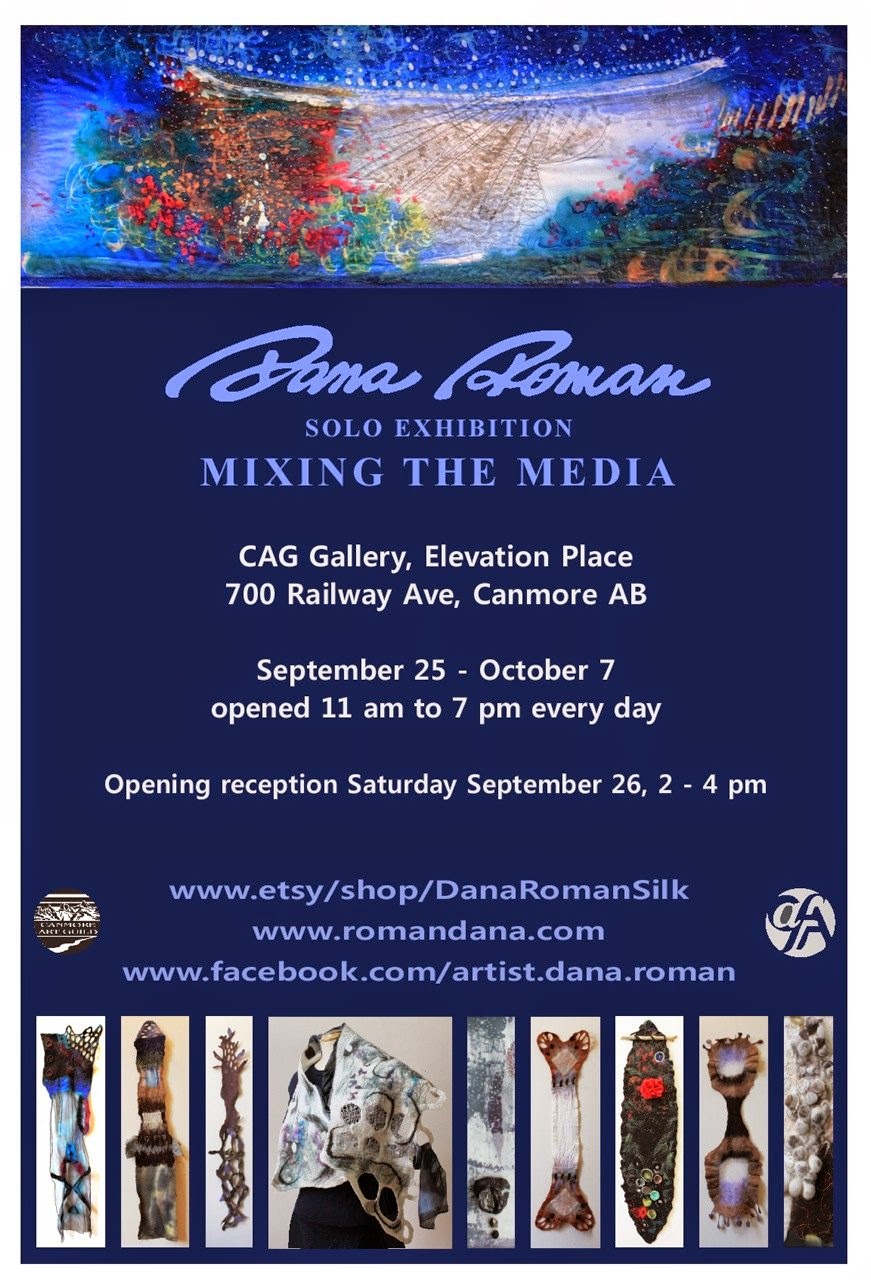 Dana Roman has a solo exhibit opening in Canmore in late September and running only briefly -- Sept. 25 - October 7.
She works in acrylics, mixed media and textiles, creating silk paintings and semi-abstract landscapes (from her website). 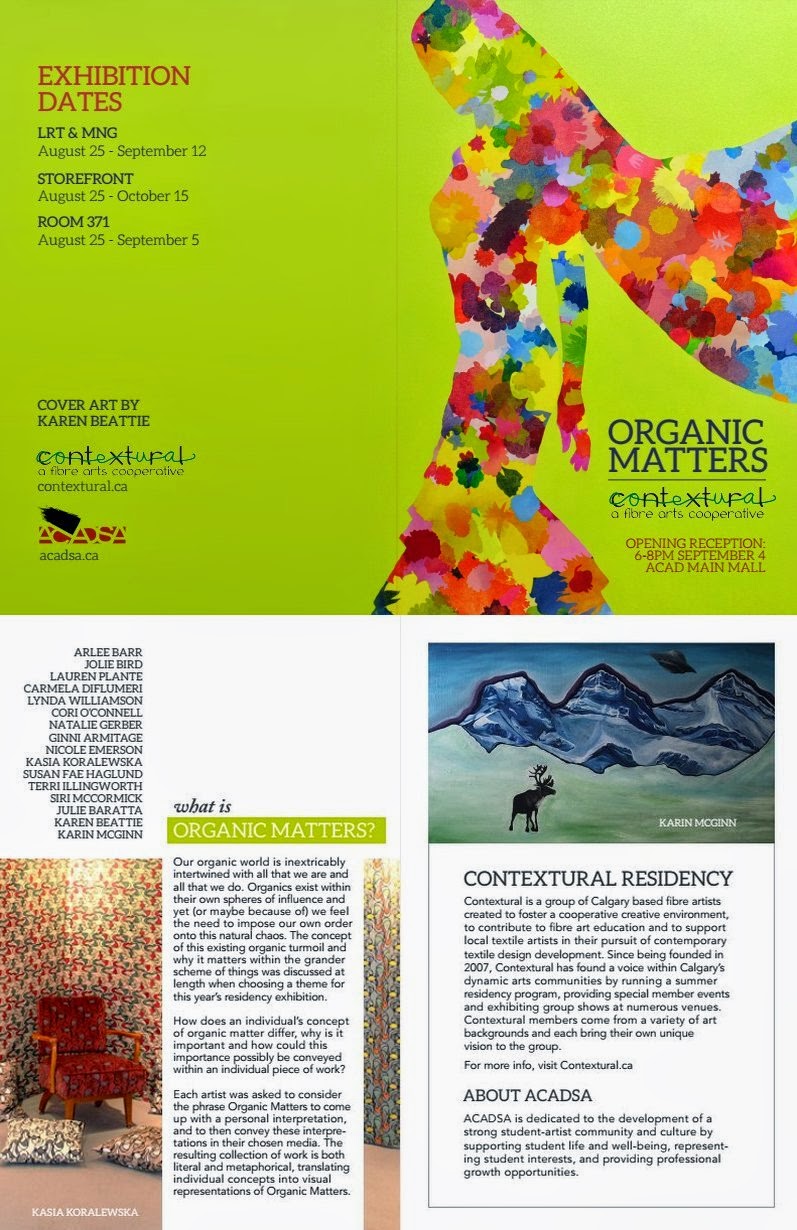 at various locations around the ACAD campus between August 25 and October 15th.  The opening reception is Sept. 4th at 6-8 p.m. on the ACAD Mall.  Check the SDA Alberta blog for details about both of these exhibits.

The 2014 edition of the SAQA Benefit Auction begins September 15th.  A selection of the submissions has been set up as a slide show (see the right-hand sidebar), but you can see all of these fine works -- including pieces from seven Western Canadian members -- HERE.

The Burgess Shale exhibit begins a new tour shortly -- check for an up-date as to locations and dates on our "Networking" page.  Members Deborah Bray and Patti Morris have been working with the folks at the site -- and it is a distinct possibility that this exhibit may be shown there after it finishes it's tour of Southern Alberta venues with TREX/The Alberta Society of Artists.  There may be a permanent home in store for this exhibit one day.  This would be an exciting outcome for the artists involved, for the SAQA WC Region and for SAQA and textile artists as a whole.  Stay tuned for developments!

Regional Reps and Co-Reps for SAQA have varying goals for their terms as your humble servants (grin). As some of you may remember, when I came on board as a Co-Rep for our Region in late October last year, I wrote a newsletter with the title, "May I Have a Word?"  Since then, I've put out 2 more volumes of MIHaW, and a few miscellaneous news mailings.   My goal is to improve the communications within the Western Canada Region.  Because our Region is so vast, this means using technology, for better or for worse!

Recently one of our members called to tell me the difficulties she was having receiving and/or reading the bulk e-mails I send out from time to time to update the Region on various events etc.  This service is provided to Regional Reps by SAQA, which updates and maintains the e-mail address records in the data base from its membership records.   This member is the only one from whom I've heard -- so far -- about the challenges of receiving the mass mailing.  (She has a MacBook Pro and iPhone. I have a PC with wireless internet service, and a land-line phone.)

Hoping to help her (and others out), I posted a query on the SAQA Reps' Yahoo group yesterday evening.  So far I've had little in the way of reply but one Rep did tell me that the person who called this to my attention is likely very definitely not the only one out there.  In her experience, there have been a variety of problems over the years, to the point where many Reps no longer use the SAQA mass e-mail service -- while others use it with impunity, and apparently no difficulties.

The issues have been raised with the tech people behind the scenes, she reported, but she has no idea if any have been resolved.  Typically, the issue isn't a simple one; these problems have a variety and combination of sources, such as:


You might be wondering, "Why don't I create an e-mail list and send out messages from my personal e-mail server?"  Well...I could do this -- but that means I have to make sure that every time I get a membership list update from SAQA, I go in and update the list.  Right now, the data base is maintained for Reps by SAQA and it's a piece of cake to use to send e-mail.

Keeping up a list on my own computer would not be an onerous task -- just time-consuming...but I'm prepared to do that if I hear from enough of you that it's what's needed to solve this problem and improve communications.

So here's the deal: if you are having trouble receiving and/or reading the mass e-mails I send out from the SAQA-provided data base, send me an e-mail directly, describing your problem.  I will pass the problems on to SAQA tech support and meanwhile, if there are more than 3 of you with ongoing problems, I will construct a regional e-mail list and communicate that way.

Summer is a busy time, so if you haven't managed to get your registration form and cheque in the mail for "Colour It, Fuse It!", the workshop/Parlour Meeting on September 10 in Calgary featuring B.C. member, artist, author and teacher, Susan Purney Mark, you now have four (4) more weeks for it to reach me (Margaret) -- through Friday, August 29.  That's the start of the Labour Day weekend, and the workshop is just 10 days later, so to be courteous and considerate of Susan's time to assemble the number of kits needed, please make sure meet this next deadline.  The fee is $45.00 for members; $50.00 for non-members.  This includes the workshop kit (a $20 value).  (As of today -- August 6 -- 8 spots remain. We can take a waiting list.)  Contact me (margblank@xplornet.ca) for a registration form if you don't have one.

Our Co-Rep Katie Stein Sather of B.C. has acquired the 25th Anniversary Trunk Show -- Section F -- for use in Canada till at least April, 2015.  Ideally this 51-piece show (each is 7" x 9" in size, mounted on black mat board and encased in a clear wrapper) will make its way east across Canada.

Katie has advised that the following dates for the Trunk Show F have already been booked:
It is hoped the trunk show will be available for Alberta in November/December, and move to Saskatchewan and Manitoba for January and February.  There is a pending request for it to return to B.C. (Vancouver Island) in March.  It will also be offered to Central Canada and Atlantic Canada, so if anyone else in the Western Canada Region would like it sooner rather than later, please contact your Co-Rep -- Katie in B.C., Dawn in SK/Manitoba, or me (Margaret) in Alberta.

(Please note that the SAQA Trunk Show Calendar has this show --Trunk Show F -- scheduled for Canada only through April 2015.  Arrangements can be made to with SAQA to extend this tour if there is enough interest in it across the country.)*

*One member has since suggested I contact the CQA re: Quilt Canada's show in Lethbridge in June 2015; if anyone can advise me who the contact person would be, I would be delighted to do so.

And thank you for your support!

Vicariously, that is.  Alberta member Margaret Blank's piece, "Tree Study III", is touring in SAQA Trunk Show "C" which is currently touring the Connecticut area through year-end, including a stop at the New Britain Museum of American Art in New Britain, CT from October 4 through January 4, 2015.

Thanks to the efforts of Katie Stein Sather, Trunk Show F is available for exhibiting in Western Canada -- and possibly across the country -- through April 2015.   Ideally, it will be shown first in B.C. and then travel east.  To acquire this show for exhibit at your local guild or art group meeting, contact Katie directly via her blog.  She'll fill you in on what's needed to get the show to your group and/or venue.

Have any SAQA WC members contributed to the 25th Anniversary Trunk Show?  Please share the relevant information -- contact Margaret via her blog or by e-mail: margblankATxplornetDOTca.
at 8:06 AM No comments: