Section 2 of the 2015 Benefit Auction Now Open for Bidding!

This section contains several pieces made by SAQA WC members:

Congratulations to Terry Aske (B.C.) whose piece, "Happy Purple Tree" is now in the collection of Cynthia Wenslow. And more contributions from SAQA WC members await in Section 3, opening for bidding on October 5.  Stay tuned for developments!

Today's the day!  The 2015 SAQA Benefit Auction kicks off today with the "Diamond Day(s)" segment.

Then...at 2:00 p.m. EDT on that day (Sept. 21), the Diamond Days window will be shut...and ONLY the quilts remaining in Section 1 will be on auction, at prices that gradually reduce at 2 p.m. EDT each day, ending Saturday, September 26.  On Monday, September 28, Section 2 will be open for bidding, and so on.

This year, for the first time, quilts that have been sold will have a red border around them (think of it as the red dot you see on pieces sold in galleries and in-person shows).  :-)

Buyer details (if provided) will be included on the quilt detail page (displayed when you click on the thumbnail of a given quilt).  So...if you're quilt has been sold, you can see who bought it, if the buyer chooses to provide that information.

To see ALL the quilts on offer, click HERE.

Questions about the Diamond Day(s), and the rest of the auction and bidding procedure, click HERE.

A Visit to the International Quilt Study Center, Lincoln, Nebraska 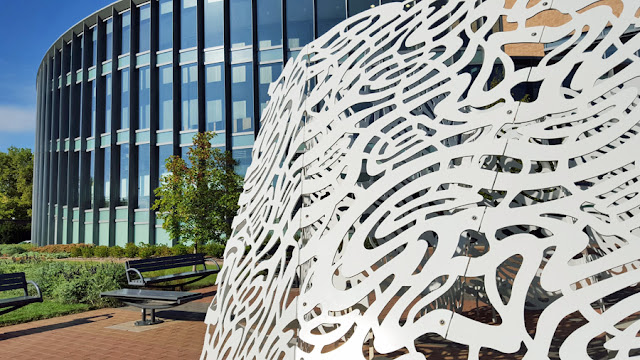 
Myself, and two friends, travelled to Weyburn for the Fibre Art Walk, organized by Jaynie Himsl of Weyburn. It rained the first day we were there, but cleared up by the second day, and we had a marvellous time! We started out by walking along the main street, and going in to the various businesses that were displaying fibre art. A map that we had picked up at the first location guided us, and we knew to look for the yarn bombing in front of each location. It was a lovely stroll.


Here are a few of the pieces that we saw...

I especially liked these two by Cindy Hoppe. Her use of recycled fabrics is inspiring!


The All Beings Confluence show was displayed in the foyer of a church and it was wonderful to walk through the sheer panels, and marvel at all the different techniques, used to create the panels.


And of course my friend and I, who both had art work in a dental office were thrilled to see our work hanging on the walls. I had “Just Because” (pink rose) and “French Wonder” (antique Clement motorcycle and rider) displayed.


Jaynie had an exhibit at a gallery in the credit union. Her unique technique of making and using cords to create her pictures is fascinating. We got a sneak peek at her process later in the evening, when she treated us to coffee and apple pie at her house.


The second day we saw an exhibit in the Signal Hill Arts Centre. Jaynie had put out a call to Saskatchewan artists and had a great response. We spent a lot of time at this exhibit  enjoying the great variety of techniques used.


The Fibre Art Network (FAN) had an exhibit “Abstracted” at a gallery in the library. For this show artists paired up; with one artist doing a realistic version of an agreed upon image, the other partner doing an abstract version. [Editor's Note: in some cases, the two pieces were created by a single artist.]

This exhibit first showed in La Conner, WA in 2013, and since then has been touring Canada. Here are some samples:

And last, but not least, we saw Martha Cole's prairie piece in its permanent location. This is a piece that Martha created in 1981. As my friend Krista, mentioned on her blog: "A spectacular bird’s eye view of a prairie landscape with colours and textures that draw you into the image."

Please click on the links provided for more information about the artists who participated in this summer-long event.  Some links are for Facebook; others, for the Fibre Art Network member pages; and still others link directly to the artist's website/blog.  Researching these links, I discovered a couple of artists whose work I have to get to know better, and whose skills will inspire my development.

Thanks, Val, for your colourful report...and Jaynie, if you're reading...Next year in Weyburn, eh?  :-)

It's only fitting that the posts about the 2015 SAQA Conference in Portland that began in May as 'summer reading' should finish on the Labour Day weekend.  This post is about the final panel that entertained and inspired us on Sunday, May 3: The Art Students' Panel, which I found one of the most inspiring indeed!

The panel was moderated by Emily Nachison, the Interim Chair of the Fiber Departement at the Oregon College of Art and Craft in Portland and an artist in her own right.  She introduced each member of the panel; after each presented, two SAQA members from Portland were to respond, having considered these questions:


Three of the four panelists were BFA students -- two in their graduating year and one in her second year.  The third panelist was graduating with his MFA in applied craft and design.

The first panelist was Melina Bishop, a mixed-media sculptor who uses everyday textile/fibrous objects as symbols.  She is interested in minimalism, the 'colour' white, and labour-intensive tasks.  She graduated with her BFA from OCAC in May.

Melina spoke about "Material as Metaphor": how she explores every-day objects (such as a bed) -- their roles and their meaning.  She studied one sort of fabric, presented in the context of another, mass production versus craft processes, clothing as metaphor, and the cross-pollination of various types of media (such as needle-felting with quilting).  Her textile installations explore "every-day objects as performance".  Her pieces are indeed minimal in size, shape -- smooth, clean lines -- and colour (or should I say, "non-colour", for she focuses on neutrals and white in particular.  You can see more of Melina's work in her web gallery HERE.

Molly Eno was the second panelist to present her work.  Also a graduating BFA student, Molly works with soft sculptural forms to "[deal] with the psychological through human and animal totems".  She is interested in the colour red, the history of crazy quilting, the Gees Bend quilters, and politics.

As a girl, Molly learned to sew and crochet, though she never made a quilt.  She works mainly with 'bright, shiny, powerful' colours and materials.

Alas, at this point my notes on Molly dwindle to nothing.  As she was speaking, I was inspired to make notes -- based on her words and the slide-show of her work -- for a project on which I am working...My apologies!  (If you are wondering about that project, and where I've been lead by Molly's inspiration, click HERE.)  For more of Molly's work, or to see how I was inspired, click HERE.

Third on the panel's roster was Laylin Francis, a "mature" student finishing the second year of her BFA at OCAC.  She returned to school to pursue an art career after many years as a secretary in the business world.  She describes herself as "a fiber artist [who] experiments with combinations of colours and textures".  She too has a background in textile/needle arts: cross-stitch, needlepoint and traditional quilting.  She is particularly interested in quilting, surface design, pattern and colour.  In addition to quilting, Kaylin's work/studies include exploring wearable art and weaving.  She is a member of the Surface Design Association.

Last...but not least, panelist Tyler Peterson, a graduating MFA student.  Originally from Colorado, Tyler received his BFA (Art Education and Painting) from Metropolitan State University in Denver.  In addition, he has spent time as an Intern at the Wildcraft Studio School in White Salmon, Washington.

Tyler presented images of his current study, based on life experience: in particular, collecting memories.  His interest in memory and memories and mementoes was inspired by the death of his grandfather, with whom he was very close.

He is interested in immigration history, his Japanese heritage, and in working with indigo.  These interests have resulted in work that "explores the in-between spaces of identity, memory and tradition."  Tyler is also a member of the Surface Design Association.

We hope you've enjoyed this "Fiberlandia Potpourri", and that it will inspire you to attend a future SAQA Conference.  Up-coming Conference venues include:

Registration and details for each conference are posted in early October of each year, so keep your eyes open!  Space is limited, so waiting until the last minute is not advised.  :-)