For many of us, quilting began with the traditional.  Learning to piece one fabric to another, one at a time, whether by hand or by machine.  And we've carried these classic designs and techniques used in the craft of quilting into our work as artists, treasuring the feeling of connection with those who have gone before and the satisfaction found in the rhythm of working with fabric, needle and thread.

Thanks to The Quilt Show, I stumbled on a lovely exhibit that I wish I could see in person.

On now through August 5 at the Agnes Etherington Art Centre at Queen's University in Kingston, Ontario:

You can find more details HERE.  Be sure to click the links on the right side of the page for a virtual tour (take it slowly so as not to get dizzy!) and a contemporary look at the symbols of the Log Cabin, interpreted in film.
at 8:03 AM No comments:

Coming Up in Calgary

SAQA members and friends from Calgary have a new exhibit! 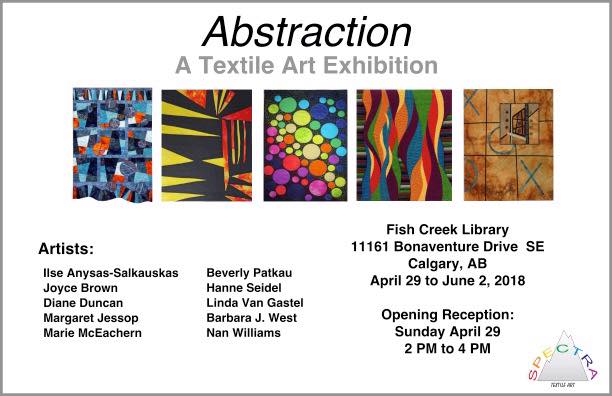 I'm grinning as I write this because at last -- after posting reminders at the end of most blog posts -- I'm hearing from people I've missed, who want to share their accomplishments!  😊

Kudos to B.C. member Wilma Brock, who just e-mailed to say "add me to the list" -- the list of members with pieces juried in to the Canadian Quilters' Association National Juried Show.  She has three in the show...and once she's permitted, I hope she'll send me photos to share for those of us who can't be there.

P.S. this goes for any of you in that show.  Any volunteers to take photos of SAQA members' work there and send 'em along for sharing?  Just e-mail them to me with a brief description (name of artist, title, size of the piece).  And if you win a prize, that's an extra-special reason to share!

More Exhibits -- This Month and Beyond

In early March I mentioned that a number of SAQA Western Canada members had been accepted into the Canadian Quilters' Association National Juried Show.

Those names have increased by one, as Margaret Inkster of B.C. e-mailed me to say she too was in the exhibit.  Congratulations to Margaret -- and to all whose work will be on display at Quilt Canada 2018 in Vancouver -- May 31 through June 2 at the Vancouver Convention Centre's West Building, 1055 Canada Place.

Next weekend, a very special one-day-only showing of SAQA WC's "Burgess Shale" exhibit will be held at the Banff Trail Community Centre.  I know I posted about this earlier -- but I decided to send a reminder out as it's up for only one day.  If you blink, you'll miss it! 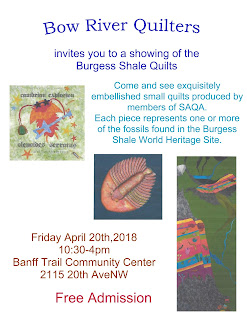 Also next weekend, the City of Lacombe, Alberta is having its 19th Annual Encore! Art Sale and Celebration of Creative Expression -- in the centre of town at the Lacombe Memorial Centre.

Yours truly has had the pleasure of being juried into this show for a booth consistently since 2011, so I hope you'll drop by to see my new work as well as that of featured artist, water colourist Sandra Bingeman, the Student Art Exhibit and Competition, and the delightful "Sip & Shop" from 6-8 p.m. Friday and 2-4 p.m. Saturday.

Here's a sneak peek at what you might see at my booth...based on a photo taken by a dear friend, and used with his permission:

Finally, last weekend, I ventured to Red Deer for the 27th Annual Central Alberta Quilters' Guild Show.  This is one of Alberta's largest shows, and it is pulled off with aplomb every year.  There were two featured quilters -- Marie Barkley, a senior who creates traditional quilts exquisitely, with a particular eye for colour in her interpretations, and Jasmine Travers-Charbonneau, a 34-year-old who's been quilting for only five years; her style is Modern.  Her quilt, "Brassica" was selected for exhibit at QuiltCon 2018!

But aside from the Featured Quilters and the terrific vendors (Hamel's Fabrics, the Superior Thread reps,
and a wide range of shops from around Alberta and Saskatchewan), I enjoyed most meeting up with SAQA colleagues -- and former ones, such as former Co-Rep for Alberta, Patti Morris.  She's still quilting, but too busy with family (aging parents, a new grand-baby) to keep her membership, but she sends along her best wishes to the Region and was thrilled to hear about the 2020 Conference in Toronto.

And I had a great chat with Alberta member Wendy Greber of Red Deer, who took a ribbon for this delightful piece:

In her statement about the work, Wendy wrote that she designed it in response to the Guild's Quilt Challenge to make a piece inspired by a song.  She chose a Country song entitled "Little Red Wagon" sung by Miranda Lambert.  She said it reminded her of the little red wagon she had as a child, and concluded, "...now this one has a new purpose in life".  😊

In addition, Wendy took a second ribbon -- for this fun piece featuring wonky trees!  She wrote that she designed it following a technique described by Australian quilt artist Jan Mullen, but using her own layout and lively colour selections.

Congratulations on your prize-winning work Wendy!

And in other news...B.C. member Susan Purney Mark, who in early May of last year was one of our terrific workshop leaders at our first Regional Retreat, is currently trundling on foot along the Camino de Santiago in Spain.  If you're curious about her journey, she is posting fairly regularly on Facebook.  Best wishes for a safe and memorable pilgrimage, Susan!

Remember, if you have exhibit information to share with your SAQA colleagues in Western Canada, across Canada and world-wide (yes, members in other Regions read this blog!), please e-mail blog editor Margaret Blank.
at 1:55 PM No comments: 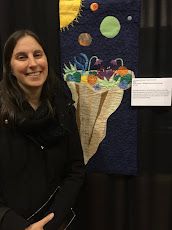